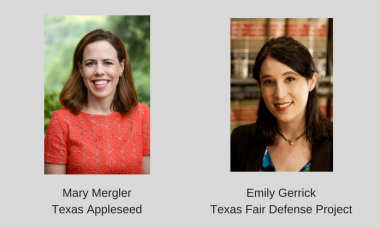 Last week, a federal district court in Tennessee issued a monumental decision — one that the Texas legislature must take note of if they want Texas to avoid a similar suit. The federal court struck down a Tennessee law that suspended the driver’s licenses of people who failed to pay criminal fines and costs, holding the law was unconstitutional because it had the effect of punishing low-income people more harshly than wealthy people, simply because they did not have the ability to pay. The court also noted that because driving is so essential to employment in a state without robust public transportation, suspending licenses as a collection tool is “not merely ineffective; it is powerfully counterproductive."

Texas’ Failure to Appear/Pay (FTAP) Program is very similar to the Tennessee law that was struck down as unconstitutional. Through the FTAP Program (commonly referred to as “Omnibase” after the private vendor that administers it), Texas courts can contract with the Department of Public Safety to put holds on driver’s licenses when people miss a court date or fail to pay their fines and costs. People with FTAP holds cannot renew or obtain a license until the holds are lifted, which doesn’t usually happen until the fines and costs are completely resolved.

Texas Appleseed and Texas Fair Defense Project have been researching and observing the negative impact that the FTAP Program has on low-income Texans for years. We will release an in-depth report in the fall, but preview a couple of key points here:

A legal challenge similar to the one filed in Tennessee could be successful in Texas. But rather than wait for that to happen, the Texas legislature should fix the FTAP Program when it reconvenes in January. If they’re not willing to scrap the whole Program, there are a number of important changes the legislature should make to help people escape the FTAP Program’s cycle of debt:

The FTAP Program is currently a blunt instrument that punishes poverty and hinders Texans’ economic self-sufficiency and mobility. The legislature should overhaul the FTAP Program to ensure that it only punishes those who truly have the ability to pay but are willfully refusing to do so.