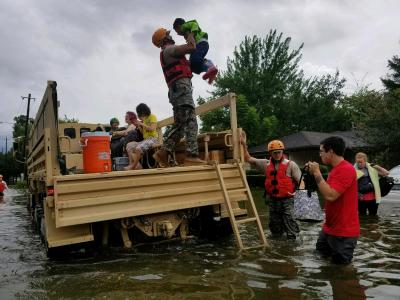 Yesterday, the Texas Tribune ran a story about a six-year-old girl named Karla.  She and her father fled Houston’s rising flood waters through a second-story window in their apartment, with Karla’s father lowering her into the waiting arms of a Houston police officer before he climbed out himself.  While the story’s primary focus is on the city’s neglect of the neighborhood in which they live, it also describes the way that the trauma of the evacuation continues to affect Karla, who was terrified by the thought of returning to the apartment they fled.

Karla is not alone.  As this disaster continues to unfold, we are just beginning to understand the extent of the devastation.  Even so, it is already quite clear that there are thousands of Texas children just like Karla, whose traumatic experience will continue to have an impact long after the waters recede.  The National Association of School Psychologists notes that devastating events like these have long-lasting effects for children, whose sense of security and normalcy can be completely undermined by the experience of a disaster.

It is precisely for this reason that it is critical for kids who are displaced by Harvey to get back to school as soon as possible: school is a place where, even in a crisis like this, children can experience a sense of normalcy.  It is also a place where children and young people can access resources they need to recover from the emotional trauma of the storm.

So what can schools do?  Well – as we share in our resource for parents and students – federal laws protecting and ensuring resources for homeless 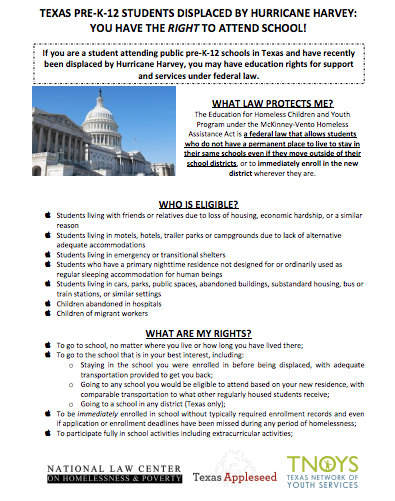 students cover children who are displaced by a natural disaster. This includes not only those living in shelters or temporary housing, but also those living with friends or relatives.  These federal protections require schools to immediately enroll children who are displaced by the hurricane and to help children get transportation to school once they are enrolled.    (For more information, you can review the Texas Homeless Youth Handbook.)  In fact, TEA has already released guidance reminding school districts of their obligations.  As part of these requirements, every district in the state has a homeless liaison whose role is to ensure that students are connected with service providers that are able to address a range of needs aside from education, including free meals, health, and mental health services.

Schools can also bring trauma-informed practices to bear in responding to the behavioral needs of students displaced by the hurricane.  Children may express their trauma through behavior – leading, in some cases, to disciplinary consequences at school.  In fact, a study of students who survived Katrina showed that displaced students were more likely than their peers to receive a disciplinary referral at school.  Texas can learn from schools in Louisiana that have adopted alternative responses to avoid placing children who are acting out because of trauma in the school-to-prison pipeline.

At Texas Appleseed, we are keeping all our fellow Texans affected by this tragic disaster in our hearts.  As we have in the wake of previous hurricanes, we plan to roll up our sleeves to work with the communities affected to ensure that those displaced have access to the help and resources they need to stabilize, and that rebuilding happens quickly, equitably, and results in more resilient neighborhoods so that we don’t repeat this tragedy in the future. Because we want kids like Karla to be able to return home and thrive – and in the meantime, have all she needs to heal.