Teacher Speaks Out Against Discretionary Suspensions of Young Students 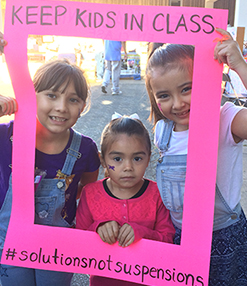 In 2015, Texas Appleseed released Suspended Childhood: An Analysis of Exclusionary Discipline of Texas’ Pre-K and Elementary School Students. The first-of-its-kind report quantifies thousands of discretionary suspensions that are given to pre-K through second graders every year. It also points out the disparities in who receives these types of suspensions: Black children, boys, and students with special education needs are pushed out of class at unequal rates compared to their peers.

We believe that these suspensions are doing more harm than good. Children who are suspended miss valuable instructional time, often for behavior that is normal for 4 to 8 year-olds. Getting kicked out of class can also affect children’s feelings about themselves as learners, their place among their peers, and their self-worth.

Hannah is a teacher in Austin ISD. The following is her firsthand account of how discretionary suspensions have affected her students.

I’ve been an educator in Austin ISD for 6 years. I’ve worked in 4th, 1st and 2nd grade classrooms and two different Title I schools. Every year I’m blessed with a group of bright, spunky and sassy students. Every year I’m continually amazed at the growth my students make and their insights.

I would be lying if I said teaching at a Title I campus has been easy. I’ve had my fair share of challenging parents, behavior management issues and students needing more support than I can provide. Behavior management has been particularly challenging to navigate. I’ve dealt with students throwing chairs, displaying disobedience and complete non-compliance.

Two particular students stand out to me. One joined my 2nd grade classroom in November. He’d been living in a car with his mom for 3 weeks until a family friend adopted him. He came to school with a bright smile on his face but often refused to do work. After one particularly challenging day with him, I called an administrator for help, they came, and they sent him home. The people I called didn’t try to talk him through his actions, have him reflect, or give him the chance to apologize or make up the work he missed. He left feeling shame and sadness, he lost instructional time, and a part of me also thinks that he felt like trust was lost between us.

There’s another student who also holds a special place in my heart. She suffered from PTSD after she was in a car crash with her mother when she was in Pre-K. She survived the crash, but her mother did not. She received special education services for emotional disturbance. She would often be sent home but not a single referral was ever made so that she would receive additional services. This student learned to fear adults. When a male assistant principal came into the room she would drop to the floor and her body would start shaking.

When this student came to my classroom her traumatic episodes escalated. I frequently had to call for back up. If someone wasn’t available, she would sit in an administrator’s room or be left unattended. She would return to class broken and distraught, no better than she left. One day her temper tantrums were so loud we had to evacuate the room. Administrators made the decision to send her home without consulting me. The next day, this student appeared more traumatized than ever before. She looked like a shell of a person and wouldn’t interact with other students. She missed hours of instruction and opportunities to interact with peers.

As a teacher, I put every student first. I chose to work in a public school to serve the public, not pick and choose which kids are in my room. It’s time we start helping students, meeting them at their level rather than punishing them for something that’s usually not their own choice.

This post is part of Texas Appleseed’s 20th anniversary celebration. Between now and the end of December, we’re celebrating 20 of our proudest accomplishments. Learn about the rest of our work here and on social media.