AUSTIN, Texas — A new report reveals how the OmniBase program, operated by the Texas Department of Public Safety and used by local courts across the state to prevent driver’s license renewals, fails to achieve its purpose — increasing court compliance and revenue collection — while negatively impacting more than 400,000 Texans. Analysis of data from over 800 municipal courts in Texas shows that courts that use OmniBase see no financial or enforcement benefits over courts that do not use the program. 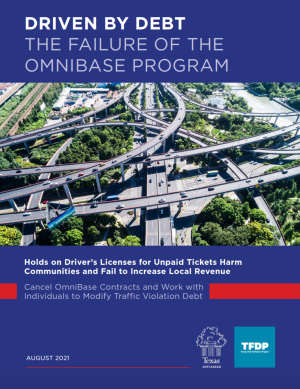 The report, Driven by Debt: The Failure of the OmniBase Program, is released by advocacy organizations Texas Appleseed and Texas Fair Defense Project.

“The new data is clear and reinforces what we’ve known all along — that the OmniBase program is problematic and ineffective,” said Amelia Casas, policy analyst at Texas Fair Defense Project. “OmniBase simply seems to exist to further debilitate Texans who are already hurting financially and prevent them from legally driving to places like work to earn the very money that they need to pay off their debts.”

Harms of OmniBase
OmniBase prevents Texans from renewing their driver’s licenses, issuing what is known as a “hold,” when a person is unable to pay ticket-related fines and fees or fails to appear in court, typically associated with traffic offenses. While Texans with access to financial resources can often pay off their tickets, indigent Texans struggle with completing a partial or full payment. The only way to lift a hold is to completely pay off all the debt — even drivers who comply with the court by paying through a payment plan or working off their debt via community service cannot reclaim their licenses until the debt is satisfied in full. Even more troubling, while judges are required by Texas law to consider a person’s ability to pay, many judges reject applying the alternatives at their disposal, like community service, waivers and payment plans. Texans who are too poor to pay often continue to drive with an invalid license to meet their basic needs, such as getting to work, school, or doctor’s appointments. OmniBase holds can often lead to warrants and jail time when people continue to receive tickets.

“It’s promising that jurisdictions such as Harris County and the City of Austin have opted out of OmniBase, and that the City of Dallas appears poised to opt out as well,” said Chris Harris, director of the Criminal Justice project at Texas Appleseed. “Cities and counties increasingly understand that OmniBase exacerbates poverty and disproportionately harms Black and Brown community members while also failing to improve public safety. On top of all that, we now know that OmniBase doesn’t even correspond with collecting more revenue. At this point it's unclear what purpose the program serves besides generating fees for the OmniBase Services of Texas corporation.”

Data Collection & Select Findings
The organizations analyzed data from more than 800 active municipal courts in Texas through public information requests to the Texas Department of Public Safety on jurisdictions with OmniBase cases and municipal court activity by city from the Office of Court Administration.

Additionally, we draw from our previous reports on the OmniBase program, using data from requests to the Texas Department of Public Safety on jurisdictions with OmniBase cases and municipal court records in Dallas and Houston.

“People are rightly fearful of ending up in jail or losing their jobs, simply because they are in an unmanageable cycle of debt and are unable to pay,” said Harris.

Key Recommendations
The organizations urge local governments to do the following:

About Texas Appleseed
Texas Appleseed is a public interest justice center. Our nonprofit, celebrating our 25th anniversary in 2021, works to change unjust laws and policies that prevent Texans from realizing their full potential. We anchor a dynamic network of pro bono partners and collaborators to develop and advocate for innovative and practical solutions to complex issues. Texas Appleseed also conducts data-driven research that uncovers inequity in laws and policies and identifies solutions for lasting, concrete change. Visit www.texasappleseed.org.