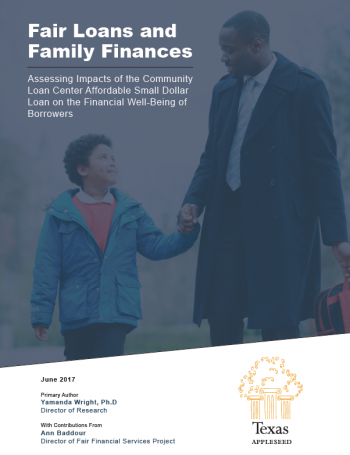 A new report by Texas Appleseed, Fair Loans and Family Finances, finds that access to fair loans improves financial stability for low-income Texans. The report examines survey data from nearly 400 Community Loan Center borrowers (CLC).  The Community Loan Center, with nine locations throughout Texas, offers low-cost loans to borrowers who might otherwise use payday or auto title loans to meet a short-term financial need. The loan, a maximum of $1,000, is offered at 18% interest with a $20 fee, and payable over one year. An average $941 CLC loan costs $1,056 to repay, compared to a $4,300 repayment for a similar payday loan.

Though most families in the survey were not able to increase savings during the one-year period after first taking out a CLC loan, the study saw significant improvements in paying down debt and avoiding financial pitfalls. Borrowers were less likely to receive calls from debt collectors, had fewer bounced checks and experienced fewer struggles paying for groceries by the end of the one-year survey period. More than half of the borrowers were able to reduce total debt “somewhat” or “a lot.”