A recent U.S. 5th Circuit Court of Appeals ruling gives hope to Texas borrowers who are wrongfully charged with a criminal violation simply because they defaulted on a loan. The court found that the defendant in the case — a payday loan company — waived its right to arbitrate when it submitted false affidavits that claimed borrowers wrote hot checks.

Filing criminal complaints to collect on a debt is against the law. State law explicitly prohibits a lender from “threaten[ing] or pursu[ing] criminal charges against a consumer related to a check...in the absence of forgery, fraud, theft, or other criminal conduct.” [See Tex. Fin. Code § 393.201(c); see also Tex. Fin. Code § 391.201]. But that hasn’t stopped the illegal and unethical practice by debt collectors. Research by Texas Appleseed and the Dedman School of Law Consumer Advocacy Clinic at Southern Methodist University documented thousands of cases where payday loan borrowers in Texas have faced wrongfully filed criminal bad check charges. 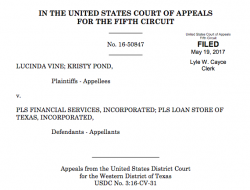 A Texas attorney sued on behalf of a group of borrowers, who were named in wrongful criminal complaints filed by PLS Loan Store. The 5th Circuit ruled, in Vine v. PLS, that the company could not hide behind an arbitration clause in an attempt to avoid court because PLS, “substantially invoked the judicial process,” when they filed criminal complaints against the borrowers. The ruling allows the victims of PLS’ practices to have their day in court. Though a victory related to the actual abusive debt collection practices used against these borrowers is still in the balance, having access to the courts is a key first step.