Policing in Schools - From Safety to Discipline

In 2010 Texas Appleseed released a groundbreaking report on policing in Texas schools. The report documented the explosive growth in the number of police in schools, prompted in part by the now-discredited narrative of a generation of “super-predators” entering schools and controversial “broken-windows” theories of policing. From the ‘90s to the present day, the number of school resource officers on campus in Texas grew by leaps and bounds.

The report showed that school police in Texas do far more than keep students safe. In many districts, they took on a large role in school discipline, bringing an often inappropriate law enforcement mentality to an educational environment. Statewide, hundreds of thousands of Class C Misdemeanor tickets were issued to students for minor misbehavior.  Although these Misdemeanors can sound innocuous, they can have dire consequences for students, as they are heard in adult criminal courts without the usual protections afforded to juveniles.  Here are some of the results of criminalizing minor student misbehavior, in parents’ own words from the report.

My son has received tickets for various offenses ranging from horseplay that resulted in accidental assault by contact, [to] having cigarette butts (washed) in his jean pockets, a fight he did not start that he simply defended himself, three for foul language,[and] one huge one for missing school (classes—not whole days). The total for said tickets was $1,520, [but] it might as well have been a million to someone in my financial situation. The tickets were all assessed when he was 15 and 16 years old. Now since he has turned 17... they consider my child, who cannot vote, an adult and made us go to court and told us that if it wasn’t paid immediately that he would be placed in an adult jail facility.

My 12 year-old son has received five tickets from his school since he entered middle school...He once received one of these misdemeanor tickets for throwing food in the cafeteria during lunch. The ticket [was] for “disturbing the educational environment.” We had to appear in court eight times so far, and have two pending dates for next school year. This is really interfering with my child’s education. The offenses are so petty it’s amazing this can continue to happen. My son is biracial (black). What bothers me is how his school is predominantly white, yet most of the kids in the court from his school are minorities. 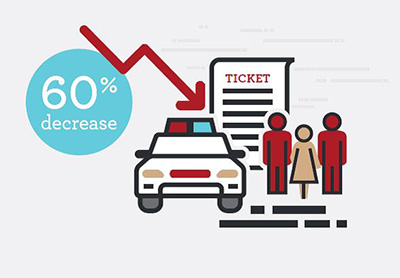 Fortunately, in 2013, Texas lawmakers began to recognize the harm done by these practices.  They made it more difficult to issue Class C Misdemeanors for school-based offenses, and eliminated the criminal offenses of “Disruption of Class” and “Disruption of Transportation” in the Education Code for students on their home campuses.  In 2015, lawmakers decriminalized truancy altogether.  Since those policy changes, Texas Appleseed has documented a dramatic reduction in the number of complaints due to these policy changes over the next few years, but tens of thousands of such complaints are still filed each year, with sometimes outsize consequences for students and their families.

Stay tuned for later this week, when we will be releasing the latest update on the data on policing in schools, along with recommendations for the next steps we believe Texas lawmakers should take in the coming legislative session.

To continue to support this kind of innovative advocacy, please donate to Texas Appleseed.

This post is part of Texas Appleseed’s 20th anniversary celebration. Between now and the end of December, we’re celebrating 20 of our proudest accomplishments. Learn about the rest of our work here and on social media.