The Real Solution is Housing the Homeless, not Criminalization

The Austin City Council and Mayor Adler did the right thing by limiting the scope of city ordinances that criminally punish sitting, lying down and camping. Protecting the dignity and humanity of every person should be a guiding principle in Austin, and their actions made progress towards that goal. Cities across Texas should look at similar limitations they have in place, and whether they are criminalizing homelessness itself.

While the changes in the ordinances may have made individuals experiencing homelessness and their belongings and camps more visible, the fact is these camps have existed for at least a decade in Austin. With limited shelter beds in our city, many people are forced to live on the streets. And, of course, this is true of many large cities in Texas. Our focus must remain on solutions to end homelessness, not pushing people experiencing homelessness back into the shadows.

Unfortunately, Governor Abbott has threatened Austin with interventions focused on making the problem less visible again, with a deadline of November 1 before he sends in state employees. These threats included having state agencies use their authority to quarantine people and throw out people’s belongings from underpasses, as well as increased presence of state troopers. What Austin as well as other cities in Texas actually need from the State is support for ending homelessness, including increased funding for housing the homeless and additional resources for healthcare, including substance abuse and mental health treatment.

The changes to these ordinances also need to be considered in the context of the broader strategy to end homelessness in a state where cities are becoming increasingly unaffordable. In Austin, one needs to earn more than $25 per hour to be able to afford a two-bedroom apartment. Yet the estimated average wage of the renting population is about $20 per hour, and rents continue to rise. Houston, Dallas, and San Antonio are also seeing rises in the cost of living. Ending homelessness requires a commitment to addressing the lack of affordable housing, and to their credit, all of these cities have increased resources dedicated to that purpose. 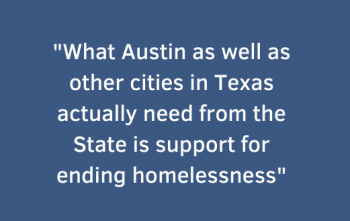 By contrast, the ordinances criminalizing sitting, lying and camping results in thousands of criminal records and arrest warrants — in all of these cities. These records create additional barriers to escaping homelessness, since a record often disqualifies people from receiving services or being considered for a job.

Heiwa Salovitz, an advocate who has disabilities, uses a wheelchair, and has been in and out of homelessness in Austin, reported to Texas Appleseed that prior to the ordinance changes, police officers required him to relocate on a weekly basis. This occurred despite the difficulty in transporting belongings via wheelchair and the lack of ADA compliant areas where he could exist. His few belongings and money have been stolen several times, though he never reported it due to fear of the law enforcement response to him. Another man, Alvin Sanderson, who is still experiencing homelessness, told his story to Austin’s City Council. After receiving tickets under the No Camping ordinance, he moved to an area prone to flash floods and nearly drowned during a thunderstorm.

Austin’s City Council left sensible limits in place even with the changes they made; those camping, sitting, or lying must not obstruct access to businesses or residences, camping in hazardous locations is still prohibited, and people are still not allowed to camp in public parks. Furthermore, state laws that govern criminal activities like trespassing on private property remain unchanged. Other cities should look at this as a model.

Those of us who are privileged enough to enjoy stable housing in a state economy that is becoming increasingly unaffordable would do well to remember the words of a young person we interviewed for our report on youth homelessness: “All you have to do is be considerate to the possibility that this could happen to [you].” Many of our neighbors live a heartbeat away from homelessness — easily triggered by a job loss, family breakup, or other life crisis.

When we avert our eyes and ask that homeless populations be pushed back into the shadows, we avoid wrestling with the problems of affordability and homelessness. But if Texans will look this problem in the eye, we can find compassionate solutions, and we will all be the better for it.